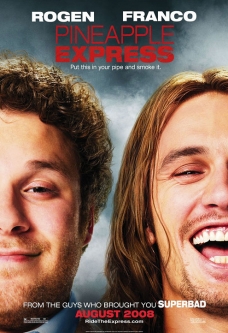 "from the guys who brought you Superbad"... asta zice cam tot... :D

Angie Anderson: Fuck you, Dale. I lost my virginity when I was fourteen, okay? How many women have you even slept with?
Dale Denton: Like two and a half.
Angie Anderson: Two and a half? What is a half, your hand? That doesn’t count!
—
Robert: Are you high?
Dale Denton: What? No!
Shannon: You are high as a fucking kite!
—
Red: Why don’t you follow his lead and just chill out, man?
Dale Denton: I’m chill. I’m chill as a cucumber, man.
Red: You don’t seem chill.
Dale Denton: I’m more chill than you.
Red: You’re more chill than me?
Dale Denton: Yeah.
Red: Look what I’m wearing. Kimono, dog. What’re you wearing?
Dale Denton: A suit.
Red: Yeah, exactly.
—
Dale Denton: [while hiding in the woods] Even if he found that roach, how could he find us?
Saul: Um... heat-seeking missiles... bloodhounds... and foxes... barracudas...
Dale Denton: I’m just – I’m kind of flabbergasted when you say things like that. It’s weird.
Saul: Thank you.
Dale Denton: Not a compliment.
—
Saul: Let’s roll, man! I’m done with the woods! Let’s go! C’mon, man, let’s get the fuck outta’ here!
Dale Denton: [sarcastically] Okay... Uhh let’s go... No... It’s not working... the battery’s dead.
Saul: Wait...! What do you mean it’s dead?
Dale Denton: [laughing] What do I mean? I mean the battery’s dead. The battery’s dead!
Saul: No, no! What do you mean, the battery’s dead?
Dale Denton: How can I explain this to you differently? The battery is dead. It ceased to live. It’s deceased now. The car needs a battery to start, Saul.
Saul: [frustrated sigh] How did this happen?
Dale Denton: Well we clearly fell asleep with the battery on and-...
Saul: Aw, man... Talk radio?
Dale Denton: Yes, talk radio.
Saul: So boring, man! The car just committed suicide.
—
Saul: BFFF?
Dale Denton: Best Fuckin’ Friends Forever, man!
—
Police Liaison Officer: What the hell is that? What the hell is that?
Dale Denton: Oh, oh, it’s a roach. It’s a joint. I have anorexia. Honest, I thought it was decriminalized.
Police Liaison Officer: Selling drugs to minors has *not* been decriminalized. I’m the police liaison officer with this school, and I just saw a bunch of my kids comin’ around the corner with their eyes as red as the devil’s dick!
—
Dale Denton: Couscous – the food’s so nice they named it twice.
—
Robert: You assholes do exactly as I say, or I will take you outside and fuck you in the street!
Dale Denton: No! Don’t fuck us anywhere!
—
Red: Do you know what today is?
Saul: Tuesday.
Red: This is my cat’s birthday today.
Dale Denton: I don’t see a cat in here. I’m sorry. Did you let it out by accident?
Red: No, because he died three months ago, okay? So now who’s the funny guy?
—
Dale Denton: He fucking killed him!
Saul: Who killed who?
Dale Denton: A cop, a lady, and a guy!
Saul: A cop, a lady, and a guy, man? That’s like a massacre.
—
[He shows them his shaved armpits]
Red: You see this? You see that? There’s no hair under here, bro.
Dale Denton: What’s the significance of that?
Red: It makes me aerodynamic when I fight. I can take danger.
—
Saul: You still got that bong I got you when I was in Tel Aviv?
Red: Hell yeah, Bong Mitzvah! Hit it up, dude!
—
Saul: Oh, sic
k! You threw up on my printer!
Dale Denton: I did.
Saul: You break it?
Dale Denton: I hope not.
—
[Saul throws his cell phone into the woods after suggesting that they can be traced]
Dale Denton: Whoa! What the fuck was that?
Saul: I was trying to hit that tree. I missed.
Dale Denton: What tree?
Saul: That one.
Dale Denton: Why didn’t you smash it on a rock like a normal person like I did?
Saul: I don’t know! How often does somebody smash things? I’m rusty, fuck.
Dale Denton: Oh, man, did you at least see where it landed?
Saul: I don’t know. Just call it.
Dale Denton: Call it? With what? My phone has been smashed!
Saul: [pauses] Y’know, I bet they can’t even triangulate those things.
Dale Denton: Well, you shouldn’t have said anything, because now you convinced me they can! You were very convincing back there!
Saul: Okay, okay. Fine, I’ll go find it. Fuck.
Dale Denton: Do you see it?
Saul: See what?
Dale Denton: The phone, you idiot!