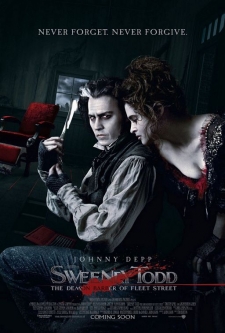 Ladies and Gentlemen!
May I have your attention PĂĂĂĂ-LIIIIIIIZ?

There’s a hole in the world like a great black pit
and the vermin of the world inhabit it
and its morals aren’t worth what a pig could spit
and it goes by the name of London.

There was another man who saw
that she was beautiful...
A pious vulture of the law
who, with a gesture of his claw
removed the barber from his plate!
Then there was nothing but to wait!
And she would fall!
So soft!
So young!
So lost and oh so beautiful!

A woman alone,
With limited wind,
And the worst pies in London!

I’ll come back when you have judge on the menu.

These are my friends, see how they glisten?
See this one shine, how he smiles in the light,
My friends, my faithful friends...

And the judge? When will I get to him?

Can’t you think of nothin’ else?
Always broodin’ away on your wrongs
what happened heaven knows how many years ago!

His throat was there beneath my hand.

There’s a hole in the world like a great black pit
And it’s filled with people who are filled with shit
And the vermin of the world inhabit it.
But not for long...

They all deserve to die.
Tell you why, Mrs. Lovett, tell you why.
Because in all of the whole human race
Mrs. Lovett, there are two kinds of men and only two
There’s the one staying put in his proper place
And the one with his foot in the other one’s face
Look at me, Mrs Lovett, look at you.

Who sir, you sir?
No ones in the chair, Come on! Come on!
Sweeney’s. waiting. I want you bleeders.
You sir! Anybody!
Gentlemen now don’t be shy!

Not one man, no, nor ten men.
Nor a hundred can assuage me.
I will have you!
And I will get him back even as he gloats
In the meantime I’ll practice on less honorable throats.

But the work waits!
I’m alive at last!
And I’m full of joy!

Hey, don’t i know you mister?

The years no doubt have changed me, sir, but now i suppose the face of a barber and the face of a prisoner in the dark are not
particularly memorable.